Effortlessly fusing the rich cultural choices of a Western European metropolis and the laid-back spirit of a giant Mediterranean... beach bar, Barcelona remains persistently low budget. We combed the streets of both old classic and up-and-coming neighborhoods and discovered that this is one city were value-for-money hot spots come in abundance.

All roads lead to La Rambla
A straight line descending from the central Placa Catalunya towards the sea is enough to give you an idea of what Barcelona is all about. Legions of visitors coffee-and-tapas-in-hand disperse around stalls packed with souvenirs and flowers, follow mesmerized the sleek moves of street magicians and human statues and take selfies in front of the imposing Gran Teatre del Liceu. Nobody leaves unmoved from the hustle and bustle of La Rambla.
Just follow the tantalizing smells bursting out of the historic food market La Boqueria and… Jackpot! A delicious assortment of dried fruits and local cold cuts, exotic cactus fruit salads and thick animal tongues straight out of a splatter b-movie - you can see and taste it all starting from €1, in this time-defying, atmospheric setting.

After the sunset, head to the cosmopolitan Cafe de l’Opera (in the same neighbourhood since 1929) for sangria and appetizers with a scent of nostalgia, or enter the magic world of Bosc de les Fades, a leafy café populated by fairies and gnomes hidden by the Wax Museum.
To the east of La Rambla, the labyrinthine Barri Gòtic (Gothic Quarter) is famous for its monumental bar-hopping. In the scenic Plaça de Sant Josep Oriol, among the painters and street poets surrounding the imposing Iglesia Santa Maria del Pi, you come across hangouts like the bohemian Bar del Pi which has been entertaining Catalans for several generations.
Give a typical Italian piadina a try at Piadina Cicciolina on Ample Street, a tiny gastronomic temple in the name of the famous Italian politician and pornstar, before moving on to Sweet Rebel (an exotic ode to reggae, decorated like a Caribbean beach bar), or Ample 32 for rock cocktails and vegetarian snacks (great offers on Sundays & Mondays).
To the west of La Rambla, the once unwelcoming neighbourhood of El Raval is now shaking off its disreputable past, proposing everything from collections of idiosyncratic vintage paraphernalia (Boogaloo) to historic late-night absinthe hangouts, that once welcomed the likes of Hemingway, Picasso and Dali (Bar Marsella).

Architectural Strolls
Barcelona’s architectural map is quirky and unique, offering a variety of exciting choices without you really having to spend a cent. Park Güell, the fairytale gardens designed by the city’s trademark modernist architect Antoni Gaudí, is an urban mirage populated by colourful snaky benches, dragon-shaped fountains and whimsical mosaics generously on display in the arches overhead, the city of Barcelona sprawling panoramically in the distance. The only thing there that charges a small admission is the Gaudí House Museum.
The flashy facades of La Pedrera and Casa Batlló, in the vast Passeig de Gracia, have jazzy angles and fearless colours that are by themselves enough to fill a few film rolls (or gigabytes) - though a visit further to their interior (for a rather costly admission price) truly unveils Gaudi’s creative vision, glorious down to the last piece of furniture.
Nothing of course compares to the sight of his most majestic masterpiece, the famous expiatory church of Sagrada Familia - a work in progress (since 1882) in the crossroads of Goth and art nouveau (check for ticket offers and skip the lines online).
Should you wish to go further down the Modernist path, on Passeig de Gracia you will also come across Casa Lleo Morera designed by another great of the Modernisme wave: Lluís Domènech i Montaner, the man also responsible for the stunning Palau de la Música Catalana in La Ribera neighbourhood. If architecture was never your thing, it will become now.

Water notes and skating rhythms on the coast
The central Parc de la Ciutadella is well-known for its rich history and a wealth of leisurely walks and rows around the boating lake, with a monumentally romantic waterfall, a menagerie of zoomorphic statues and grand medieval buildings like Castel dels Tres Dragons, or the Parliament of Catalonia. Here you will never be short of a feast or a festival, whether that involves beer and salsa or capoeira and loud-and-proud bongos.
A few steps further, down the beach, the neighbourhood of Barceloneta offers a variety of fish, tapas and sparkling wine in authentic Catalan locales like the busy Can Paixano. Bathers may make themselves scarce during the winter months, but skaters whooshing by and drinkers cheerfully chilling with sangria make the beach a friendly hangout in perpetual motion.
More serious drinkers stray towards El Born and the pedestrianized Passeig del Born with its wealthy choice of mojitos (go for the retro El Copetin) and caipirinhas (Berimbau).
Wherever you end up after hours, make sure first you grab a good spot on the Montjuic hill at dusk. There, just below the neo-baroque Palau Nacional, La Font Magica (The Magic Fountain) offers completely free of charge a magical spectacle of ultra-melodic water acrobatics. A positively… rainy work of art where 50 different water shades dance to the sounds of the Godfather soundtrack, or an equally dramatic Spanish zarzuela. 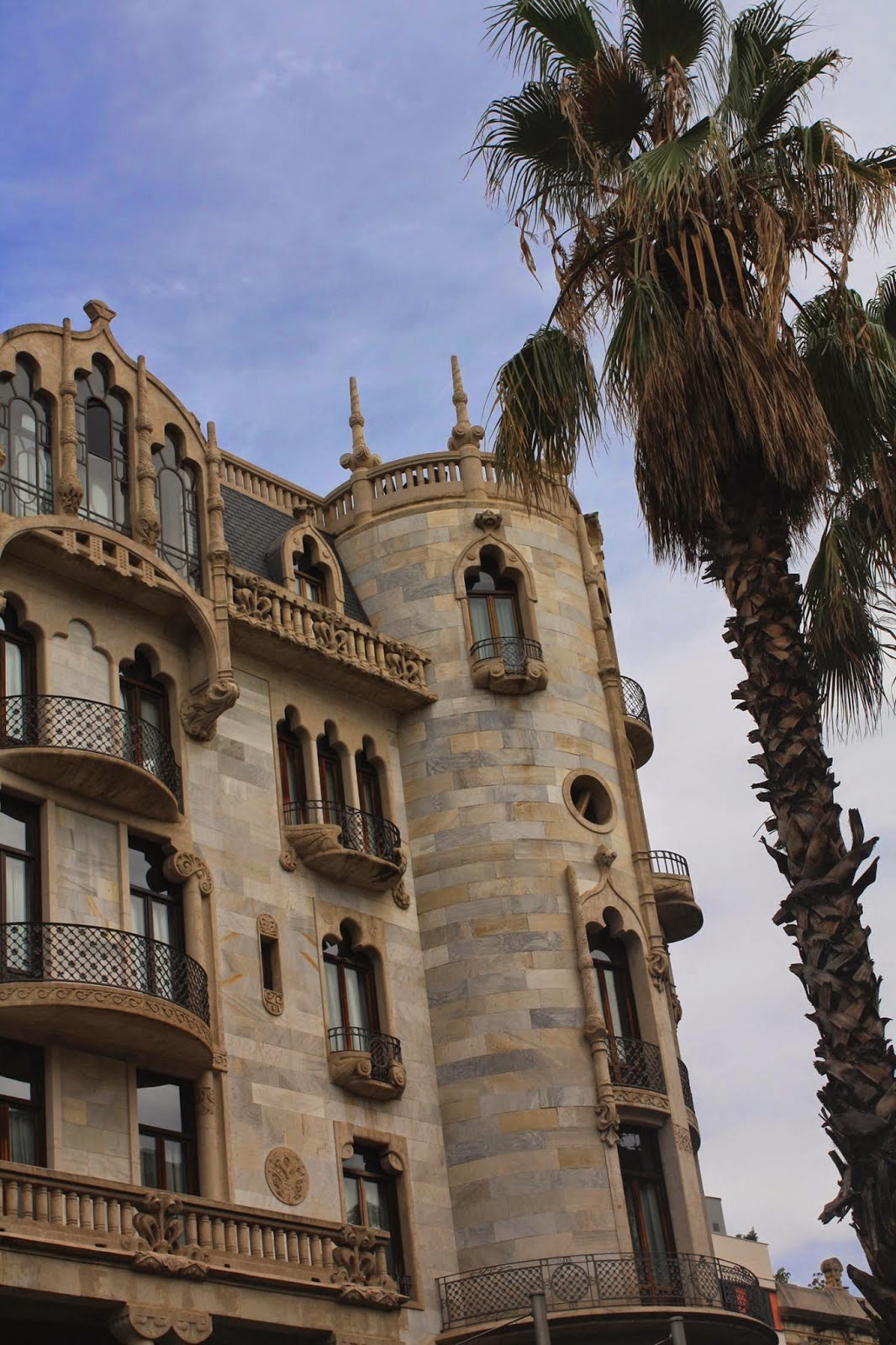 Quick Tips
-Barcelona Card includes free transport and other offers on popular Gaudí attractions, the Picasso and Miró museums, the Zoo and the Aquarium (a must-see for little children), restaurants and souvenirs (from €34,00 for a 2-day card).
-Alternatively, get an Articket Barcelona for discounted admission to six major museums (€28,50), the T10 Zone 1 travel card for transport (€10.30) - or, even better, cycle (Taller Bicicle, €6/6 hours, €12/24 hours).
-Leave the designer gear of El Corte Ingles shopping centre behind and opt for for the local flavours and secondhand books of historic markets, like the 19th century Mercat de Sant Antoni in El Raval.
-Gràcia is a neighbourhood still largely tourist-free, but constantly on the up, thanks to the lively bars (Woody’s or Sol de Nit), exotic restaurants (the Japanese Kibuka) and independent boutiques (Suite) of Plaça de Sol.
-Book cheap flights to Barcelona with Vueling (www.vueling.com ).
-Beware of the pickpockets!

-360 Hostel Barcelona A stone’s throw from the impressive Arc de Triomf, it is clean, spacious, laid-back, modern and unexpectedly well-equipped. Did you say hostel?...(from €6.90/pp).
-Pension Casablanca Two-star hotel in the central Via Laietana - a little on the noisy side, but spotless and friendly (from €20/pp).
-Aparthotel Silver Stylish three-star hotel in the up-and-coming Gràcia neighbourhood (€60).
-Ηotel Catalonia Born A comfy, beautifully refurbished 19th century dwelling in Museu Picasso’s neighbourhood (from €55, www.hoteles-catalonia.com)
-If you travel with friends, check out the city’s long list of cosy apartments (from €13/pp, www.barcelonaforrent.com).